Innsbruck’s public transport network of buses, trams and trains within the city is operated by IVB. The latest network maps in pdf format are available on IVB’s download page. Look for ‘Network map‘ on the list and choose either the schematic map or the topographical map. The route map and leaflet for ‘The Sightseer’ hop on – hop off bus tour is also there.

Innsbruck is the capital of Austria’s western state of Tyrol (Tirol in German). For maps of regional bus and train lines in Tyrol and local lines in places like the popular medieval town of Kitzbuhel, the region’s transport operator, VVT, provides a large number of downloadable pdf maps.

Click the thumbnail map below to see the list. Then scroll down it to ‘Network Plans’ (Liniennetzpläne in German). These transit network plans are in schematic/diagramatic form.
Ski buses are integrated in the regular bus services. Additionally, a large number of other ski buses are run by independent operators.

The downloadable pdf network maps include the following districts and towns in addition to Innsbruck:

Find rooms and apartments in Innsbruck and the region. 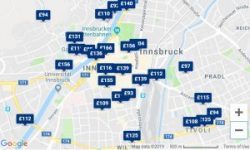 Recent news from Austria and/or Innsbruck.


Maps for travel and outdoors